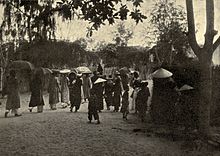 A wedding in Annam (Middle of Vietnam) in 1900s. The bridegroom’s family was going to bride’s house to ask her parents to take her home, a traditional process of Vietnamese people.

The figure at the wedding ceremonies of Central Vietnam in 1894

While traditional clothes of Vietnam have always been very diverse depending on the era and occasion, after the Nguyễn Dynasty women began to wear elaborate Áo dài for their weddings. These dresses were modeled after the Áo mệnh phụ (royal Áo dài) of Nguyễn Dynasty court ladies. The style of the Nguyễn Dynasty has remained popular and is still used in current-day Vietnamese wedding attire. The difference between the Áo mệnh phụ and the typical Áo dài is the elaborateness of its design. The former is usually embroidered with imperial symbols such as the phoenix and includes an extravagant outer cloak. This gown is preferably in red or pink, and the bride usually wears a khăn đóng headdress. The groom wears a simpler male equivalent of the dress, often in the color blue.

Previous to the Nguyễn Dynasty, it is likely that women simply wore fancy, elaborate versions of Áo tứ thân.

An engagement ceremony usually occurs half a year or so before the wedding. In the past, most marriages were arranged by the parents or extended family, and while children were sometimes consulted, it was nearly always the parents’ final decision. It was not unusual for the bride and groom to meet for the first time at the day of their engagement. However, in the last few decades, Vietnamese women and men marry based on love rather than arranged marriages.

Preparation for the traditional Vietnamese wedding begins with choosing a date and time for the marriage ceremony. This is decided by a Buddhist monk, Spiritual leader, or fortune teller due to the spiritual nature of the occasion. This tradition may change if the family is Catholic.

At the end of the ceremonies, there is a wedding reception for the two families and guests.

Asking permission to “receive” the bride

In actuality, this now obsolete ceremony was used in the past to confirm—last minute—that the marriage would still take place. Due to often forced arranged marriages, some brides fled from home into the country. Thus, this ceremony was more so used to confirm that the wedding would proceed. You must ask permission or else you won’t be able to marry. If you ask, you will be welcomed with kind comfort, and a chance to receive your bride.

Receiving the bride at her house 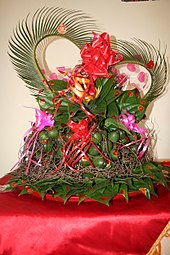 On the day of the wedding, the procession of the groom’s family is led in specific order. The first person would be the representative of the groom’s house followed by the groom’s father, the groom, then the rest of his family and close friends.

In the past, the groom’s mother might not take part in the procession as a sign that she would not be a threat to the future bride; she would even “hide” for a short period upon the bride’s welcoming to the groom’s home. However, this practice has long been abandoned. The number of people participating in the groom’s procession varies but is usually restricted to a smaller number (20 or so) to make it easier on the bride’s family, which must receive all the guests.

In the procession, the groom, his family and friends bear elaborately decorated lacquer boxes, covered in red cloth. Inside these boxes are gifts representing the wealth that the groom’s family will bring to the bride’s family. Gifts are betel, fruit, cakes, a roast pig, fabric, and an abundance of jewelry for the bride. Usually, the number of gift boxes varies between 6 or 8, but never 7 or 9 since it is seen as bad luck. However, it depends on personal view and might be reduced to 2-3 boxes. [The number must be an even number such as 4, 6, or 8. The gifts are covered by the red color paper or cloth. In Vietnamese beliefs, the even number and the red color will bring luck to the young couple.]

A formal tea and candle ceremony along with speeches follow. While tea has always been an essential part of Vietnamese life, Vietnamese tea culture is not as complex or ritually rigid as its counterparts in China, Japan or Korea. A traditional wedding may be the only time in a Vietnamese person’s life that a formal tea ceremony is essential.

The bride and groom, in front of all their guests, will turn to their parents. Each parent will then give advice about marriage and family to the couple. A candle ceremony will follow, symbolizing the joining of the bride and groom and the joining of the two families. The groom’s gift boxes filled with jewelry will be opened by the groom’s mother, who will then put each piece on the bride for good fortune.

Bringing the bride to groom’s house[edit]

The reception for the bride and groom’s family and friends

Nowadays, however, the reception occurs immediately after the procession ceremony to the bride’s house, and takes place at any desired location—such as either couple’s house, a restaurant or a hotel banquet hall. It is not until after the reception that the bride is brought to the groom’s house. The vast majority of newlyweds also have their own place. If so, they simply go to their house.

The number of guests in attendance at these modern-day receptions is large, usually in the hundreds. Elaborate 7 to 10 course meals are served, often starting with cold platters then followed by hot dishes such as seasoned lobster, seafood hot pot, and other Vietnamese and Chinese banquet dishes, often ending with dessert or a fruit platter.

Guests are expected to bring gifts, and it is traditionally in the form of money in an envelope. Immediate family usually gives more money to the bride and groom. At one point during the reception, the bride and groom will go from table-to-table to thank guests for their blessings and sometimes collect the envelopes. Most couples however leave a box at the sign-in table for guests to drop in their envelopes and cards, although this is frowned upon by older traditional conservatives. Occasionally, the family and guests’ monetary gifts will cover more than the cost of the wedding and reception.

The bride’s change of dress

In modern weddings, brides usually change into three different gowns during the reception. Her dresses usually comprise the Western white wedding gown, a second Western dress to be worn at the end of the evening during the dancing, and a third traditional Áo dài to be worn during the traditional table visits to personally thank the guests for coming.

Modern infusions in religion and culture

While most Vietnamese are Mahayana Buddhists, a significant number are Catholic. However, this does not change the traditional Vietnamese wedding. Vietnamese Catholics still incorporate all parts of the wedding ceremonies and reception. The only difference may lie in the ancestor worship at each newlywed’s house. Because Catholicism does not condone such worship, this ceremony is often omitted or replaced with worshipping the Christian God or venerating Mary. Due to the strong cultural values, this substitution or omission is not always made, however.

Most current-day Vietnamese weddings—both in Vietnam and overseas—incorporate both Western and Vietnamese traditions. One such infusion is the bride wearing both a Western wedding dress and an Áo dài during the wedding and reception.

Perhaps the most significant Western and Vietnamese infusion is the proceedings of the traditional three ceremonies. With the omitting of the first traditional ceremony (“asking permission to receive the bride”), the last two traditional ceremonies (“receiving bride at her house” and “bringing bride to groom’s house”) tend to no longer take place on the day of the wedding but instead are used in place of a Western engagement ceremony. Thus, the actual wedding day may only include a Buddhist/Church ceremony, and large reception.

Traditional and modern symbols of marriage are often featured during Vietnamese marriage ceremonies as decorations on the wedding umbrellas, lacquer gift boxes (or the red cloth that covers them), or even the decorations in the homes of both the bride and groom. They usually include lanterns, doves, initials of the couple, among other things. However, one symbol that is indispensable are the words “song hỷ.” This phrase also appears as the character 囍, which reflects the influence of Chinese characters. While literacy in these scripts during feudalistic times was restricted mostly to scholars, officials and other members of the elite, characters such as these have always played an aesthetic role in important occasions such as weddings.